Ministering to the city of Columbus, Ohio

That the man of God may be perfect, throughly furnished unto all good works.

Pastor James D. Hood went on to be with his lovely Lord and Saviour Jesus Christ on Thursday, December 3, 2015. He had suffered from congestive heart failure for many years. He always attributed his condition to his life (before being saved) of alcohol, drugs, and all sorts of other things. He tried to take good care of himself and for many years was able to astound the doctors with his strength and stamina that God helped him achieve through proper eating habits and exercise.

At the last, however, the years of abuse before he was saved took their toll and in March of 2015 he turned the church over to our current pastor, Jobe Beachler. The doctors told him he had a very short time left and he wanted to be around to help Pastor Beachler make a smooth transition.

Even during that time his desire was to still go out on the street and preach. He had his walker fashioned with a small PA and a platform for his Bible and had his son or some men from our church take him to different places and he preached on the street corners through the summer. He confounded the doctors during this time because he lasted much longer than they thought possible. He gave all the credit and glory to God. 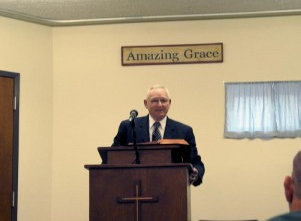 I was born in March 1944, raised in a lower middle class home, and lived in some ungodly neighborhoods while growing up. I was not raised in a Christian home, thus I started running the streets at an early age. I began to drink when I was just 14 or 15 years old and went to jail for the first time around that same age. By the time I was in my late teens I was already hooked on alcohol and was beginning to fool around with drugs.

I was put out of school when I was fifteen and asked not to return due to my rebellion. At the age of seventeen I entered the U.S. Army to escape jail time and to try and run from my problems. I spent three years in the Army, but it didn't help. I only got worse. I was in and out of jail, always fighting and never really happy.

Finally at the age of 36 I had a heart attack. This was due to the many years of drugs and alcohol. At the time of my heart attack I only weighed 122 lbs., had lost everything, and was at the bottom of the barrel. I was physically and spiritually a mess.

Then one day my children asked me to go to church with them. I went, but left the church under conviction and was so mad I wanted to punch the preacher. I said that I would never go back. But, I did go back and on February 1, 1981, I accepted Christ as my Lord and Saviour. I surrendered to preach a year and a half later and God gave me a burden to reach those in the same mess that I had been in.

Since 1986 God has allowed us to be in the rescue mission work. Where we preach the gospel many times a week to drunks, dopers, down and outers, drop outs, prostitutes, and anyone who will come and listen. God allowed us to start an independent Baptist church, A.G.B.C., in 1992, of which A.G.B.M. (Charity Mission) is a ministry of that church.